BROWSING the internet, writing and watching streaming services are the only things I use my computer for, so why am I stuck believing a traditional laptop is best for me?

This is the question I had to ask myself when contemplating if I would get better value from making the switch to a 2-in-1 — a device combining the computing power, storage and software compatibility of a laptop with the flexibility and freedom of a tablet.

With Samsung’s Windows 10 Galaxy Book joining the growing list of impressive 2-in-1 products on the market, I decided to see if I was ready to say goodbye to my laptop for good.

The detachable 2-in-1 device has a gorgeous 12-inch Super AMOLED display that has an impressive 2,160 by 1,440 resolution.

When removed from the keyboard, the display’s curved edges, top-oriented power button and volume rocker offer an authentic tablet experience.

The plastic shell of the display gives the illusion of an aluminium finish, which gives the device the sleek and sexy appearance of other Samsung devices.

There are two speakers on the left and right edges of the device, with both offering decent sound, while the right side also houses a 3.5mm headphone jack and two USB-C connections — USB 2.0 and HDMI inputs can be connected with an adaptor. 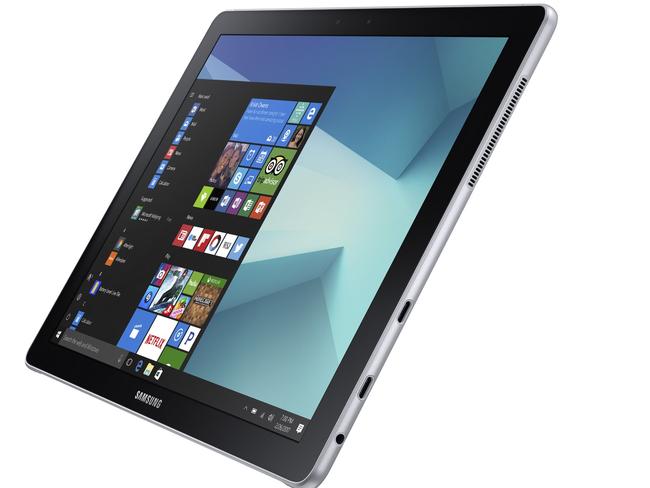 The Samsung Galaxy Book can double as a 12-inch tablet. The full-size detachable keyboard cover is the same layout and size as most Windows 10 laptops meaning there is no adjustment period or learning curve, and the backlit keys make the device easier to use the device the dark.

While Samsung could have followed the Surface Pro’s design of a rear kickstand and a detachable keyboard, the Galaxy Book includes a keyboard cover with various magnetised orientations for holding up the display.

Even though this helps avoid adding too much bulk to the device, it means the Galaxy Book tends to be flimsy when being used on anything other than a flat surface.

I did find this to be frustrating at first, but when lounging around I simply removed the display and used the on-screen keyboard built into the tablet.

After a while I actually found using the large tablet more comfortable than it would have been to use a keyboard or traditional laptop in the same position, yet it would still be nice to have the option of a reliable kickstand. So the keyboard cover isn’t the most sturdy kickstand.

In addition to the detachable keyboard, the Galaxy Book also comes standard with an S-Pen stylus that can be used for physically scribbling down notes or as a replacement for the mouse.

Both are a welcome inclusion as the Surface Pro requires users purchase the detachable keyboard and stylus separately.

The stylus is very responsive and fantastic to use, although it could be easy to lose given there is nowhere to physically store it on the device.

On the plus side, if you do happen to misplace the S-Pen you could always purchase the Staedtler Noris digital — an adaptation of a traditional pencil with the cutting-edge technology of an S Pen.

Impressively, the tablet creates an electromagnetic field that interacts with the tip of the S-Pen to ensure you always knows the exact location of the point of the pencil.

Another positive is both the keyboard and stylus don’t need to be charged for use. The Staedtler Noris digital looks and feels exactly like your pencils from school.

The Galaxy Book comes standard with Windows 10 to help it feel like an authentic replacement for your PC, while also including a few Samsung exclusive apps to take advantage of the S-Pen.

Powering the device is a dual-core, seventh-generation Core i5 processor running at 3.1 GHz, with 8GB of RAM and a 256GB hard drive also included — more than enough to meet my aforementioned computer needs.

Samsung says the Galaxy Book offers 11 hours of battery life from a single charge, although I found it delivered closer to five to six hours life during heavy use — still more than enough for your morning commute.

The Galaxy Book has also been fitted with “fast-charging” abilities, however this doesn’t work as quickly as you would hope when using the device while plugged in.

To take advantage of the 12-inch Super AMOLED display, Samsung has made the device compatible with HDR video content — a technique allowing preservation of details otherwise lost due to limiting contrast ratios.

This alone makes the device a great choice for those wanting to watch video content on the fly. The Galaxy Book is Samsung’s latest 2-in-1.

I came into this review looking to see if Samsung’s 2-in-1 Galaxy Book could be a solid replacement for my traditional laptop and I truly believe this could be the case.

There is no denying the keyboard kickstand poses some pretty big issues with the device, but the inclusion of the stylus and ability to use as a tablet certainly offers benefits not seen with the laptop. The appeal of 2-in-1 will really just depend on what you use the device for.

I enjoyed using the Galaxy Book as a tablet when watching TV on the couch and drawing using the stylus has also been a fun, new experience.

Having to use the detachable keyboard kickstand on a flat surface does add some frustrations, although I generally found myself sitting at a desk when writing on my laptop anyway.

As someone who enjoys binge-watching when on trains and planes, the Super AMOLED display is a huge winner in my eyes.

I would put some serious thought into the uses of your device and if a 2-in-1 can better fit your needs, why not make the switch?

Or if you wanted to own both a laptop and tablet, but don’t have the money for both, this could also be a valid solution.